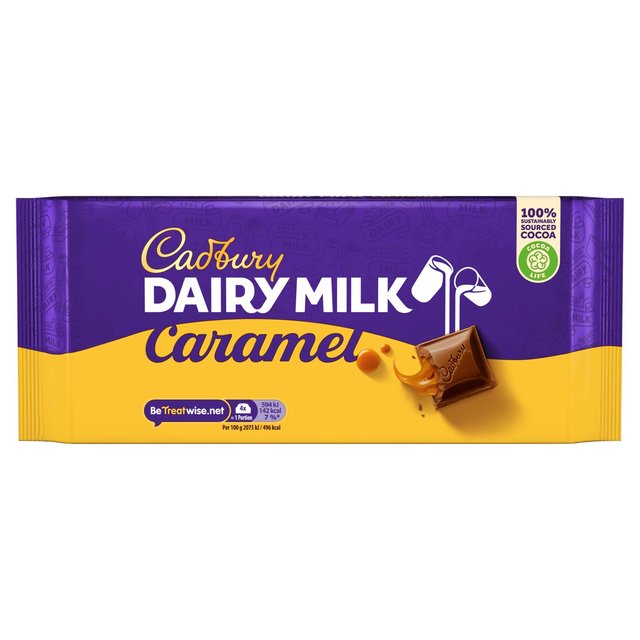 Milk chocolate with caramel centre.In June 1904, George Cadbury and his team of confectioners created a chocolate containing a ‘far higher milk content than previously known’ to challenge the Swiss domination of the chocolate market. After names such as ‘Highland Milk’ and ‘Dairy Maid’ were considered, Cadbury Dairy Milk (CDM) was launched in 1905 and became an instant success. Over 100 years later and the recipe is relatively unchanged and is kept under lock and key in a safe within Bournville. Cadbury introduced its famous ‘Glass and a half of full cream milk in every half pound’ slogan in 1928, but the world-famous symbol was only used in advertising. It would be another half-a-century before the design was used on packaging.By Appointment to H.M. The Queen Cocoa and Chocolate Manufacturers Cadbury UK Ltd., Bournville.100% Sustainably Sourced Cocoa, Suitable for vegetariansBeTreatwise.netCocoa LifePartnering with Fairtrade FoundationCocoa Life aims to make lives better. The education and entrepreneurship training we provide makes for happier farmers and thriving local communitieswww.cocoalife.org